Anyone remove the blower motor?

Couple of months ago, I dropped a nut from my gopro mount into the windshield vents (why isn't there mesh there?). I didn't think much of it at the time, I didn't hear it rattling so I figure it'd be okay... next owner's problem... lol... but a week ago, the blower motor started to vibrate when it's on high so I'm guessing the nut made its way down there.

Just wondering if it's a PITA to remove the blower to fish out the nut. From the parts diagram, it's under the cabin air filter but I think the glove box needs to be removed?
Drive A Million Miles? Challenge Accepted!

If I remember correctly the blower requires shoehorning with a big screwdriver against the floor to get it in and out.

I could be confusing this horror with a Jaguar though.
2015 Hyundai Genesis Ultimate, 77k miles. Slightly modified.

SuperKing said:
I took a quick peak at it, there's a cover under the glove box that houses the footwell light. It was raining so I didn't really bother to get a better look. Hopefully it's clear tomorrow so I can get that damn nut out of there... lol
Click to expand...


I'm pretty sure the floor interferes with pulling out the blower on this one. 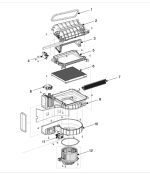 I have had the blower motor out of my 2018 G80. It has been about 2 years ago. I would think it would be the same as your car (what ever it is). Just remove the lower cover under the glove box, unplug the blower motor wiring, remove 3 screws and the motor falls on the floor.
There are no clearance problems. Just look at the way it is turned so you can get it back in correctly.
PaulM

Well, that was easier than I thought. I thought I could cheat, took out the air filter and reached into the fan. Pulled out some leaves but no nut. The motor is balanced again. No idea how leaves would get in there though.

What was interesting is, when I pulled the cover, there was water on the cover along the front edge... along with a bunch of those little maple leafs that made it past the filter. I pulled the motor and there was some water in there as well. That might explain why the windshield sometimes fogs up for no reason.
Drive A Million Miles? Challenge Accepted!
Share:
Facebook Twitter Reddit Pinterest Tumblr WhatsApp Email Share Link