jaybar said:
... after trading my Red GV80 base model for a gray GV80 with all wheel drive and Prestige package
Click to expand...

Maybe you covered this in another post or thread, but how do you like the difference? Was it worth it?
2019 Genesis G80, Base, RWD, 3.8L V6, Casablanca white, black interior. Bought new Genesis of Plano, driven in Dallas, TX.

jaybar said:
Trip home to Florida after trading my Red GV80 base model for a gray GV80 with all wheel drive and Prestige package. In 1,100 miles on I-95 did not see one GV80, TILL I pulled into my development then realize there was one pulling into driveway one street over from me.
Click to expand...

Similar thing happened to me yesterday. Drove from Cleveland to NYC and nothing, until I pull into my parking garage and shortly afterward a blue GV80 pulls up right behind me. (The guy waited 9 months for his and still had to compromise on the interior because the dealership sold two vehicles with his specs to others to capture mark-up.)

I saw my second one last week. I was going in his direction and stopped to talk to him when he pulled into his driveway. He said it was his company car. He worked for a very high end deanship (Bentley, McLaren, Lamborghini) They also own a Hyundai/ Genesis dealership in another city. He was much impressed with the GV80, telling me it was one of the nicest cars he's ever driven.

They are still pretty rare. It takes me back to 1976. I had one of the first Honda Accords. It was a ground breaking car at thw time. It got a lot of attention for the first few months.

Just saw a GCS. This makes six in my area that I’ve seen. White, black, grey, silver, green and GCS. Plus my GCS. 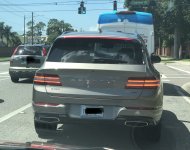 jaybar said:
I am happier but when you think all the bells and whistles the Palisades has it is surprising this "up scale" line of cars makes all those things optional.
Click to expand...

I saw another white one today with temp plates in San Diego. This thread will become less relevent soon as more and more arrive.
I saw a review from Great Briton on YouTube. This and the G80 are the first Genesis products to be sold there.

Today I saw a Cardiff Green GV80 driving down the road towards my subdivision.

we were in our van so I couldn’t flash the lights.
Click to expand...

Just drove from Ft. Lauderdale to Buffalo.. and all around(5000miles) We saw ZERO GV80's enroute, but got many looks and thumbs up for ours (3.5GoldCoastSilver/Dune Prestige). We did see 1 (Blk/Blk) near our home in Ft. Lauderdale upon return.

Which exterior color is this? Looks sharp in the sunlight.

Unprocessed1 said:
Which exterior color is this? Looks sharp in the sunlight.
Click to expand...

it would be alright if it wasn't paired with the digital side - looks like Dr Frankenstein was consulted in design. 2 x Analogue or Full Digital. not the mish mash!