Kind of sad Genesis/Hyundai make such a great product but Genesis Dealer experience is generally pretty awful
in the Luxury brand segment with a far behind last place finish.Terrible way to launch a product line.No wonder they shifted
the Sales Department heads last month. 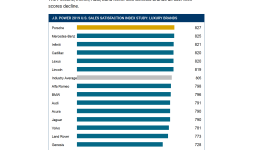 I imagine there will be some "interesting" meetings at HQ this week. I guess they already knew as they have made changes at corporate but will take time for the sht to run downhill. .

Hyundai Dealers just don't have the "Luxury Car" mindset
to deal with Luxury car purchasers. Our lone local Genesis/Hyundai Dealer
here in Calgary is pretty awful & in 4 visits I have made since January 2018
they didn't even have any coffee.
Salesmen are pleasant enough but their offices are messy & unkempt.
I sold MB & Porsche for 31 years before retiring 8 years ago so I speak from experience.
Genesis is WAY behind the 8 ball compared to the other
Luxury car lines. MB is no screaming hell either but Lexus is definitely the Customer
is King Dealer. Too bad their cars are so ugly
or I would be an owner.

I blame the dealers. Genesis had it narrowed down as to what dealers throughout the country were going to get to keep selling after the 2018 model year. Those dealers that were willing to invest in training, and facilities to make the Genesis experience what it needed to be. But, a lot of those dealers that didn't get it, sued Genesis, even though they were offered what I believe was a $6 million buyout to pay those dealers for money spent on training and their facilities. So, it could have taken years to settle the dispute, delaying the release of the 2019s even longer than it already was. So, anybody that wanted a dealer, got one. Eventually, they'll start falling off. Those that aren't putting in any effort will get tired of losing money on holding onto the franchise will drop it, take the buyout, or whatever it will be. Leaving those willing to invest the time and money into making this brand one of the best out there. They have released the "methodology" on how many GV80s each dealer will get with their initial 60 day allocation. From the looks of it, a lot of dealers are going to be lucky to get any more than just a couple over the first 2 months after it's released. At least in our district. We are currently buying any and all G90s that we can get from other dealers. We can't keep them in stock, yet these ones we've been buying have been sitting around at other dealers for 6 months or longer.
______________________________

I will say, here in Houston anyway, things are getting better. the crappy dealers are dying. The one I bought my car from who was in the process of adding signage and new dedicated space has basically removed all the Genesis branding and reverted back to a Hyundai dealer. Which is good because they refused my request for a loaner and valet.

The dealer up on 290 is great! They get the mindset, and while a lot further away, they get all my business now.

Plus, I've seen the app be more responsive. Online valet tools are now working. Even saw them in the app with the latest update.

I'm hoping all the shifting at the Chief level really moves the service forward. As really, Lexus cars aren't that special but their service is!

GarnetTy1473 said:
We can't keep them in stock
Click to expand...

I'm glad to see someone doing it right.