There is tons of discussions on how to ditch the 2357A filament lamp and use an LED instead on this forum. However, like some, I am concerned that the LED replacement still seems like a niche product, which on top of many things, require mods to prevent hyper-flashing, none which I find elegant. LEDs last almost forever, but the electronics that accompany it often fall way short. In addition, I can't tell if they are designed with on-off blinking in mind at all.

So, I decided on an "old school" solution, which is to keep the incandescent lamp and try to pro-long its life. I know some have lasted for years in my previous cars. Simplest way to me was to solder an 1 Ohm resistor in series. This drops the filament voltage by 10%, which according to charts I found on the web would predict an increase in lifetime by a factor of 2-5 times. Furthermore, with a cold resistance of around 0.6 Ohm for the lamp, this would also lower the inrush current to more than 1/2 the current amount. So far, my passenger side light failed twice right after I activated the blinkers, I am thinking the inrush current is the bigger culprit here. If this can make the bulb last 3-6 years, I would be happy.

Connecting the resistor in series is about the easiest electrical mod one can make, especially if one knows how to solder. I used a 25W resistor I had in my junk box: 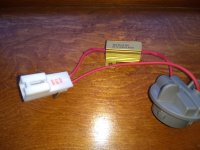 Wired in the car, I am measuring a 1.9V drop across the resistor, which equates to just under 4W of heat in the resistor. Based on derating curves, this would predict a 50C temperature rise without any additional heat sinking. People use 6 Ohm in parallel for LED replacement, which consumes more than 20W, and I doubt all have them heat sinked to a metal surface. I would love to see any pictures of such a resistor burning through the wires in the light housing, I have yet to come across one. At 4W I think I will be fine leaving it dangling in the air inside the light fixture. Maybe I will check on it in a few months.

Finally, nobody likes dim lights. Here is a picture with one light modded so one can compare the difference: 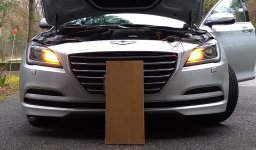 Not a fair test as the exposure may have overblown the whites in the picture. With my naked eye, I can say the difference is really minor, and it's only because I know which one I modded.

I don't wait to wait 6 years to prove out this mod before sharing it, but I think it's a good solution. Still, perform this mod at your own risk.