Things you love about the G70

I noticed the forum already has an epic stickied thread full of things we don't like about the G70, so I decided we could use a thread to lavish praise upon the things that we love about the G70.

1. Power- this car is seriously fast straight out of the factory. In sport mode I constantly find myself pleasantly surprised by how hard it pulls once the turbos spool up.

2. Fantastic Looks - this is a great looking car. In my few months of ownership I have received a metric boatload of compliments on how good this car looks. It makes me very proud to own it. From the dark chrome trim, to the fantastic colors (Mallorca Blue in my case), to the factory Brembo brakes, to the sleek lines, this car is a real head turner.

3. Handling - the handling performance of this car is unreal. Earlier today I had it up to 1.0G on the G-force indicator on an off-ramp, and even at this crazy g-force level there was no indication yet that the tires were losing traction. Simply amazing.

4. Mod potential - I am a pretty serious car modding enthusiast. My first car was a 1993 Eagle Talon Tsi AWD. I poured at least $10000 into upgrades in that car. The only thing that prevented that from being higher was the fact it was written off after I crashed into a ditch because of loose gravel on the road near a corner. My next car was a 2003 Nissan Maxima SE, that car had somewhere around $15000 in upgrades. But those two cars modded pale in comparison to this one the way it came from the factory. It's crazy to think that with a piggyback tuner and spark plugs you can easily push up into 400 WHP range. The sky is truly the limit with regards to the potential of this car.

5. Value for your dollar - it's amazing how much you get in comparison to the competition. To get a similarly equipped Mercedes, BMW, Audi etc. you are easily spending 10-15000 more. While there are a few things I would have liked to be able to add on to the G70, it is truly a fantastic value proposition.

When the Kia Stinger was initially announced, I was seriously intrigued. Never had I seen such a tantalizing mix of performance, looks and luxury for such an affordable price. I was almost certain I would be purchasing one. But then something changed, Genesis announced the G70. This car takes things up a notch from the already amazing Stinger, as it's lighter, firmer suspension, more luxurious, more refined, and a more mature look. Genesis totally drilled this out of the park, massive kudos to them. And finally massive kudos to Kia/Hyundai/Genesis for the platform this is built on, it's created by enthusiasts for enthusiasts.

Great thread to start for sure! The G70 is really a fantastic car! The quality of the cars components really stand out to me. I've done a fair bit of autocross in the past, so this kinda stuff matters to me.

Genesis really took time to put the money where it counts and make the car amazing for such a low cost. This is the first car I've had that doesn't compromise *something* in my view.

Love the power and the calibration. It drives smoothly and predictably in “comfort” mode, but allows me to be playful when in sport mode when I want it to be.

Love the handling and the steering feel. I though my F30 had good balance, but the G70’s balance is every bit as good, but with better steering and better ability to place the car where I want in a corner.

Love being able to get a well bolstered interior in a color other than black.

Something else that also stands out for me is the driver oriented technology;

The adaptive cruise control is incredibly convenient, I love being able to set my speed and then forget about it, no need to constantly manually juggle the speed. It's nice that once you change lanes away from the slower vehicle in front of you that the car so quickly brings you back up to the set speed. I love how precise the setting of the cruise control speed is, in how you can move up or down by 1 with a quick press of the toggle, or up or down by 10 with a longer press.

The heads up display is great as well. At first I didn't think I would use it much, but now it's pretty much all I use to monitor my speed except on very bright sunny days. I find there is a wealth of information displayed, such as cruise control speed, actual speed, blind spot monitoring, navigation directions, etc.

The 360 degree camera is super handy as well, parking is very easy anywhere given how you can see everything around you, including parking lines. Worrying about curbed rims is also a thing of the past as well with this system.

I too especially love the styling, handling, and power. I look forward to taking it out for a spin on weekend mornings - something I haven't done in many years. Hope to see a lot more G70s on the road in the future, but for now I'm enjoying the occasional "what is that?!" face, or people that speed up or lane change to get a better look. A guy in a new 911 Carrera came over at a gas station to check out the car and tell me Genesis 100% nailed it on the design language.

The Smart Cruise Control plus Active Lane Keep Assist (basically auto pilot) is the first cruise control I'm using with any regularity. Perfect for zombie rush hour commuting, I'm probably using it 50% of the time on the commute.

The multimedia is smart enough to play Google Maps navigation instructions from your phone, even if you are listening to a different source like the radio.

The climate control automatically lowers the fan speed to make the cabin quieter when you take a call. Friends and family comment that I sound crystal clear through the car's microphone and they can't hear any cabin noise. Finally!

Great thread @maxsilver! I was hoping one of you owners would take the helm and post some positivity about this great car to balance out the 'things we don't like' thread! All we need now is a STICKY @Genesis Motors. Looking forward to hearing from other owners here.

Coming from an 11-year old car, the technology within these newer cars is mind blowing. I've test driven plenty of other cars, but the lane keep assist as well as the adaptive cruise control are, in my opinion, the best so far. As others have mentioned, it's almost basically auto-pilot.

I have yet to post anything in the "Things I don't like" thread. This one is much easier.

1. Handling. This car handles like a sports car. It's been years since I have had a car this much fun to drive. I make excuses to drive it!
2. Rear wheel drive!!!!!!! Been years since I had a rear wheel drive car. I didn't even know I missed it so much!
3. Comfort. Amazing interior and seats. Whether I am taking a short drive or a long trip, I am comfortable all the way.
4. Did I mention it looks just downright sexy? I get a LOT of comments from people on the car. I am the only one in my area right now with a G70 and I have to admit I enjoy the attention.

I could keep going but you guys have one too so you get the point. It's just an awesome car.

When I test drove one I was impressed how comfortable it rode. Also liked the feel of rear wheel drive after years of driving front wheel drive cars.

Other than the rattle and the Genesis Connected app, I love almost everything about the car. A few highlights:

1. The engine. That turbo six is so silky smooth compared to the old VQ engine in my G37, it's like night and day. I haven't even begun to explore the performance envelope, but this thing has power in every gear practically off idle.
2. The steering. It's no miata, but as far as electric steering goes, this is probably the best rack I've experienced.
3. The interior/comfort. Love the quilted light grey leather, the seats are amazingly comfortable, I just feel good driving it, and I LOVE the cooled seats.
4. The transmission. It doesn't piss me off or remind me that its there, which are literally my only requirements for an automatic transmission.

I could get into minutiae, but this car really is the whole package... other than the rattle...

jwd1 said:
When I test drove one I was impressed how comfortable it rode. Also liked the feel of rear wheel drive after years of driving front wheel drive cars.
Click to expand...

huyluong said:
Indeed, definitely a car that'll easily do long trips. They have a good harmony of luxury and sportiness.
Click to expand...

Only if there are a bunch of gas stations along the way though...

maxsilver said:
Only if there are a bunch of gas stations along the way though...
Click to expand...

Freeway milage isn't bad at all! Now, mostly city driving, on the other hand...

I love how awesome the G70 3.3T Sport AWD handles in all sorts of weather conditions. I've put on about 50,000 km across several different G70s -- on a racetrack, on a 5000 km road trip, on dry roads, during downpours, during blizzards and icy conditions. This car handles absolutely phenomenally in all situations (given you have the proper tires installed, of course). The Limited Slip Differential helps big time with direction changes, whether on the race track or in icy conditions, making this car truly telepathic and an extension of the driver. I love how I can change the biasing of the AWD system -- Comfort for a more neutral torque split in the winter, or Sport for a decidedly rear-wheel drive-like experience.

The G70 is truly a weapon for all seasons.

Toddasaurus said:
Freeway milage isn't bad at all! Now, mostly city driving, on the other hand...
Click to expand...

Very true, freeway not bad at all... example below with 2 short pit stops in between. ECO, Smart Cruise at 77mph, with lane keep assist. 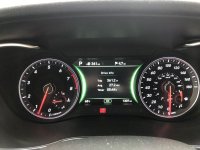 broervudu said:
Very true, freeway not bad at all... example below with 2 short pit stops in between. ECO, Smart Cruise at 77mph, with lane keep assist.

What kind of gas do you use? Wondering because I regularly get 27 mpg in sport mode 90/10 highway driving

^Keep in mind that freeway mileage also depends on traffic and hill/mountains/incline (or the lack thereof).

Case in point, Comfort mode w/out cruise control or LKA, going 65mph, minor traffic but mostly flat. Got 29mpg. ECO I was a little above 30mpg in similar conditions. Take a look..

Both using premium 92 octane. I've even gotten 33mpg in ECO mode, but I was going literally 50mph, no traffic, and roads were totally flat. Haha.

joschneider said:
What kind of gas do you use? Wondering because I regularly get 27 mpg in sport mode 90/10 highway driving
Click to expand...

joschneider said:
What kind of gas do you use? Wondering because I regularly get 27 mpg in sport mode 90/10 highway driving
Click to expand...