carguy75 said:
Turn off the traction control and see if the ECU still cut power when the wheel spins.

Important: Only turn off the traction control when you are not near any other car just in case your rear tire traction break loose and slide out of control.
Click to expand...


Yes, I had already turned off the ESC button when I was doing my testing. I assume by traction control you mean the ESC button. I've never found that turning off the ESC button makes much difference at all. These tires have really good traction.
2012 Genesis 4.6 Sedan
Champagne Beige Metallic and Cashmere

Hold to turn off stability and traction

jaywestgb said:
Hold to turn off stability and traction
Click to expand...


Thanks. I will try that.
2012 Genesis 4.6 Sedan
Champagne Beige Metallic and Cashmere

mtrot said:
Thanks. I will try that.
Click to expand...

jaywestgb said:
Cool, if you only press it, it only turns off Traction
Click to expand...

BTW the long press to disable both traction and stability control, is only applicable to the second generation and will not work for 2009-2014 models,.

daviderle said:
BTW the long press to disable both traction and stability control, is only applicable to the second generation and will not work for 2009-2014 models,.

Regardless of type of tires you have, you will break them free if you remove the fuse or implement the full disable ESC mod, for either 4.6 or 5.0 and Is not applicable for the 3.8 model.
Click to expand...


Yes, I tried the long press last night and it doesn't do anything different than a simple press does. If you want traction, try these Michelin Premier LTX tires that I have on mine. I run them at around 30 psi and the car really jumps off the line. I don't see any reason to fully defeat the ESC unless one just wants to try to do burn outs.
2012 Genesis 4.6 Sedan
Champagne Beige Metallic and Cashmere

Hi newbie
2015 10000km 3.8 htrac technology package Empire State Gray 2nd owner bought it late May 2020
Reading this old post about the air box magnet mod easy 10 minutes and done but looks like the previous owner has already done it magnet was flipped already.They also rebadged the trunk plus door sills light up even has the safety triangle mounted in the trunk. Just wondering if the original owner was a member on the form ?
Hamilton Ontario Canada
Where do you buy accessories for your Genesis? Right here in the forum store! --> [CLICK HERE] <--
Looking to update and upgrade your Genesis luxury sport automobile? Look no further than right here in our own forum store - where orders are shipped immediately!

Sprint Booster and a throttle-body coolant bypass mod cured my lagging/reluctant throttle response. The engine receive cooler air(about 20F-30F cooler) without the hot coolant heating up the throttle-body up to about 120F(or hotter)which has the engine ECU advancing timing in the +37 degree range even in low rpm driving(per my Torque live data read) instead of retarding timing to account for the hotter air flow in theory that reduces power slightly.

The Sprint Booster works by reducing the delaying of the throttle signal of the drive-by wire system at the source.

MBB 2015 said:
Hi newbie
2015 10000km 3.8 htrac technology package Empire State Gray 2nd owner bought it late May 2020
Reading this old post about the air box magnet mod easy 10 minutes and done but looks like the previous owner has already done it magnet was flipped already.They also rebadged the trunk plus door sills light up even has the safety triangle mounted in the trunk. Just wondering if the original owner was a member on the form ?
Hamilton Ontario Canada
Click to expand...

Removed the magnet from the flapper on my 2015 3.8 while I was inspecting the engine bay for stealership oversights like...leaving one of the air box clamps unclamped. The service department also left the engine bay fuse box/positive terminal post cover laying over the intake piping so when I got home from the stealership to check the oil, I see this warped and heated plastic fuse cover sitting on top of the intake pipe + a nice indention in the hood insulation from the less than detail oriented technician that did their 0.0 point inspection prior to me driving of the lot. What the actual frak?

I was able to to bend the warped cover back to it's shape (mostly) and put in the proper place. Over time the hood insulation indention has faded to almost nonexistent since I found the party foul within 24 hours so it didn't cook for days or weeks. 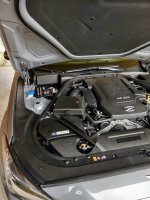 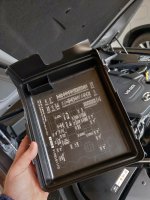 1. Never take possession of a vehicle while your 3 year old (Threenager) is with you because you will be so mentally fatigued by the time you drive off the lot you won't take the time to pop the hood since you assume the car won't have something ridiculous like a removed fuse box cover sitting on the intake pipe.

2. Hyundai/Genesis throttle mapping sucks for people that don't want to do foot to gas pedal calisthenics. People that like lighter pedal pressure to achieve results will be less than thrilled.

Why I am happy now:

I love the Genesis. I test drove a Lexus 2017 IS 350 and a 2018 Acura TLX before finding a 2015 Genesis 3.8 with the Lexicon audio hiding on the lot with a dead battery so it had to get jumped for the test drive. Once the salesperson verified Lexicon was stamped on the head unit I said break out the jumper cables because I want to test drive that vehicle. A week later, I picked up the Genesis even though I really liked the IS 350 ( Fun F-Sport package and dash cluster display was pretty slick ). The Lexicon audio and other luxury perks on the Genesis that were not present on the Lexus made the decision a no-brainer in favor of the Genesis.

Reading posts by CarGuy75 and the intake flapper mods pointed me to purchasing the Sprint Booster v3 and doing the magnet removal on the intake flapper choker which to me is kind of like the TGV (Tumble Generator) valves on the Subaru FA20 engine except on the Genesis it chokes the car in the intake filter area versus choking the engine in the intake manifold area and creating more fuel air swirling at low RPM/low load operation on the Subaru boxer engine design. When I had the WRX I modified the TGV valve open/close transition using the Cobb Accessport tuning software so I got the best of both worlds, better MPG at very light loads but the TGV valves opened sooner so incline power in lower gear improved since the engine was breathing better with the TGV valve open instead of closed when the engine load hit about .80 instead of opening at like 1.2 load levels.

I WISH we had something like the Hondata FlashPro (Honda) or Cobb AccessPort (Subaru etc.) for the Genesis sedan 3.8 or 5.0 because even if it is just an "N/A" engine and not boosted, speaking from experience with 13 years of owning a Honda Civic Si running custom FlashPro tunes for 12 years, there is a lot of daily driving improvement that could be made with some tuning tweaks. I didn't get much peak power improvement on the Civic Si but I dramatically altered the feel and fun of the car + increased power under the curve substantially since my mods allowed the VTEC crossover to occur at 3900 RPM versus 5600 RPM. Getting to the high cam faster got me useable torque more quickly for daily driving and the car had a nice flat injector pulse/duty cycle climb for a smooth increasing powerband from 4000 - 8500 RPM. Without FlashPro, the stock Civic Si ECU calibration was less than ideal. With Flashpro I had more useable power, better MPG after adjusting cam phasing, part throttle ignition timing and the Lambda target for better power versus maximum lean operation.

SprintBooster + intake flapper door magnet removal on the 2015 3.8 has me happy with the pedal and throttle response so now I actually use Eco mode at times versus just leaving it in Sport mode because the stock throttle mapping was so conservative compared to what I prefer. Did I like dropping extra $$ on the SprintBooster since it's a one trick pony for just the throttle response? No. Was it worth it to me? Yes.

bobby181 said:
I have a 2012 V6. That was the first thing I took off when I did my first oil change after getting my Gen. It still have issue with big delay's. I love the look of the Gen, but the programing is JUNK on this car. I am a very aggressive driver and this is killing me. I also am having issue with my trans slipping and hard sifts for 1-2 2-3 4-5. It will rev up 2000-4000 when slipping. Hyundai really needs to fix the programing for the driver by wire, and the ESC to give you some more play. Before it kicks in and to be able to turn it of the ESC 100%. This car is so nanny controlled it is not funny. I miss my JAG and BMW.

We need to find a fix for this, or we need to start writing to Hyundai or something.
Click to expand...