CoconutRob said:
I will post pricing Saturday. THEY HAVE BETTER NOT LET YOU DRIVE MY CAR. Where did you test drive tonight
Click to expand...

Haha - I asked for the drive earlier today and they planned to take me out in the Mallorca 3.3T Sport but when I got there they told me it was sold. I took a red 3.3T advanced out (base). I saw yours parked safely in the back lot. You're good to go!

warnermr said:
I ordered a red RWD 3.3 Sport on 7 Feb and changed the color to silver on 17 Feb. My dealer informed me on 22 Feb that they found the car and I would have it by 15 March. It got here today. Can't wait to pick it up. View attachment 18493
Click to expand...

Did you check your driveway? Maybe it is.

nsyedhasan said:
Good news! Has arrived at the dealer earlier in the week and should be delivered by next week! Can't wait to get it. By the way it took exactly 9 weeks
Click to expand...

And its finally home, it has been a long journey.

Congrats! She's a beauty. That blue and the red Brembo brakes make a gorgeous combo

Chabu said:
Congrats!!! How was the Hertrich experience?
Click to expand...

It was good. I think the big relief was no haggle Hyundai Circle price, and being fortunate to get hooked up with Nick the GM. Personally I cant stand any dealership and think you should be able to direct buy. With that being said I cant say anything bad about Hertrich. Looked over the car quick there, but when I got under the LEDs in my garage found a few light surface scratches. Not sure if this is normal or not.
AWD 3.3 SPORT
SXTH ELEMENT catch cans
Kunstwerk Racing cat back
Kunstwerk catless midpipes
ARK GT-F Springs
K&N panels
20% tint
JB4

Beautiful car love that color...I am still on the fence. 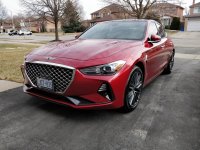 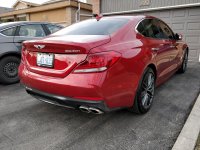 Just took delivery! I'm in love! The brown interior is killer. This is my dad's car and he loves it too 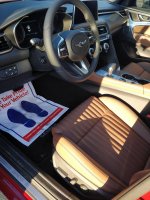 Yeah it was the reason we special ordered, definitely worth the wait imo

nsyedhasan said:
Yeah it was the reason we special ordered, definitely worth the wait imo
Click to expand...

When I bought my 2015 Genesis Ultimate Empire Gray with Black interior, I also read on this site that the dealer could not get the car from Korea. My dealer told me he could request the car and that he would let me know. One week later I received a statement sent to dealer from the factory saying that the car was built and would be awaiting shipment (Vin was included) It was about 1 and ½ months later when the car came in to the dealer. Beautiful fresh with only 8 miles on the odometer. So, we’ll see if he can get me my Red with Gray interior Prestige 3.3T AWD.
2019 G70 Prestige Red 3.3T AWD