Just got my rebadging done after picking up the car in Atlanta on Tuesday and driving her home. Thank you for the detailed instructions, it was quite easy other than the residue from the original badge. It took a ton of goof off and wd-40 to finally get down to clean paint.

StL_Jon said:
Just got my rebadging done after picking up the car in Atlanta on Tuesday and driving her home. Thank you for the detailed instructions, it was quite easy other than the residue from the original badge. It took a ton of goof off and wd-40 to finally get down to clean paint.
Click to expand...

While you at it, get rid of GENESIS and 5.0 .....debadged looks much better 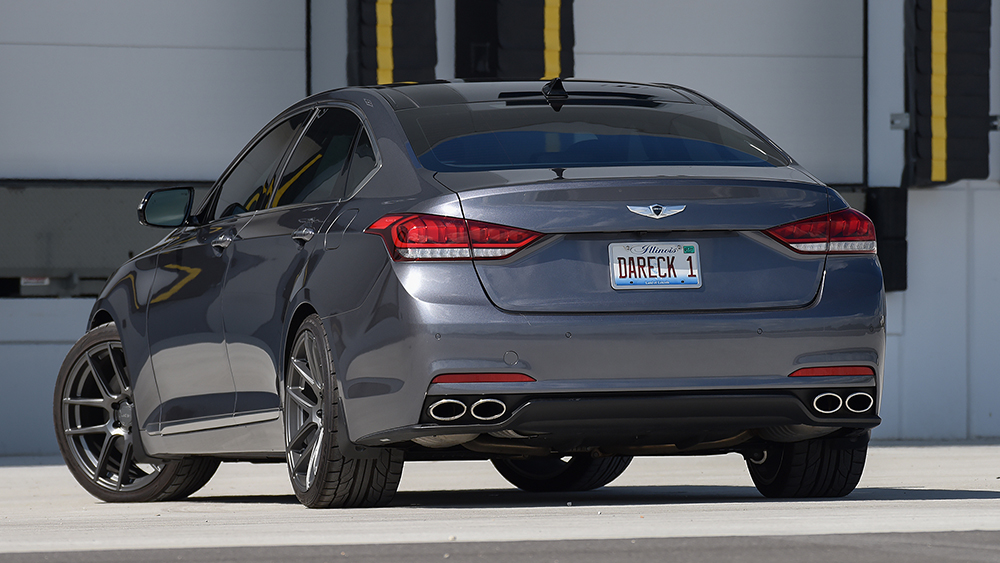 dareckibmw said:
While you at it, get rid of GENESIS and 5.0 .....debadged looks much better

StL_Jon said:
That does look nice and clean. Hmmmm, maybe I'll consider it after the tint is installed on Thursday... although I'm thinking that I'll wait for the '17 G80 badge to replace that lower left "Genesis" badge.
Click to expand...

Help support our community. For as little as $1.67 per month, you can help us pay our server bills, software bills, licensing, renewal & upgrade fees and more... Click here for more information.

I know the hardest part of mounting this badge is getting it properly located. So here are some actual design based data to help you in precisely locating the badge relative to the original intended location in Korea Domestic version. This will allow the curvature of the badge to properly match the curvature of the trunk surface and therefore prevent dust and moisture to get trapped around the edges due to large gaps created by the mismatch. Please click on the PDF file link above to download the detailed info. I hope this is helpful

just replaced mine today. Wish I saw this pdf first!! I hadn't noticed the slight shaping of the badge until it was stuck on there. One of those things that only i will notice, but will make me a bit crazy.

Fantastic Job. I can't wait to switch mine out !

Congrats Jrhodes! After my 2 buddies asked me what kind of Chrysler I was driving, I just replaced my 2015 wing with the hood wing from a G1. I've always liked the G1 wing better anyways. I used the G1 hood wing because it's almost as big as the G2 trunk wing and best of all, it has a more V like vertical looking wing span vs the flatter look of the current. The hood wing fits perfectly too! The G1 trunk wing is rather small and the wing span is flatter than the hood wing.

I was lucky and had a 50+ degree day here in Cleveland. The glue residue from the G2 wing was massive and was a bit difficult to remove even with Goo Gone.

The former wing permanently stained the paint. I couldn't remove the stain with wax, alcohol, or even polishing compound. My paint is silver. Good thing the new wing covers this blemish. I won't be changing the front wing because of this issue. 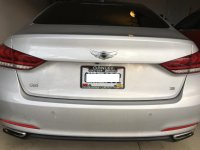 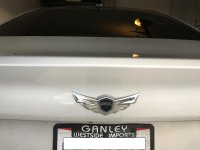 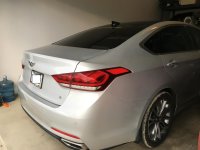 Re: Chrysler No More!!

Nice the G1 wing looks good on there!

Thanks for this pictorial. Probably wouldn't have attempted this without it.
Wings arrived yesterday ( fast-thanks Sal ).
The "H" came off pretty easy, but most of the adhesive stayed on the car.
Wasn't real hard to remove, but did make it take longer than the estimated 30 minutes.
Very happy with the results.

Don't judge me by my messy garage. Unloaded the camper, and haven't put it all away yet.

The pen is mightiest when it is ordering more swords.
[SIGPIC][/SIGPIC]
Do not handicap your children by making their lives easy.

Look what just came in! Will be using this tutorial either today or tomorrow.

I just put these 2 way LED wings badge on my car . This is a different look but it looks great . will post a picture when I can. Works with the parking lights (glows white)and the brake lights(glows red ) . WOW. Now my car really stands out from the crowd.

Here what it looks like on my car at night. WOW. Tell me what you think.


bigpapainscotia said:
Here what it looks like on my car at night. WOW. Tell me what you think.
Click to expand...

I used this tutorial to great success! Thanks!!

Taking on this challenge this weekend. Looking forward to it thanks to this tutorial. Very well done!
09 Genesis 3.8 Tech
15 Genesis DH 5.0 Ultimate
17 Genesis G90 3.3T Premium

where'd you buy the 17 badges from ebay?